Anne McElvoy was born on 25 June, 1965 in County Durham, England, is a Journalist,Broadcaster. Discover Anne McElvoy’s Biography, Age, Height, Physical Stats, Dating/Affairs, Family and career updates. Learn How rich is She in this year and how She spends money? Also learn how She earned most of networth at the age of 55 years old?

We recommend you to check the complete list of Famous People born on 25 June.
She is a member of famous Journalist with the age 55 years old group.

Who Is Anne McElvoy’s Husband?

She net worth has been growing significantly in 2018-19. So, how much is Anne McElvoy worth at the age of 55 years old? Anne McElvoy’s income source is mostly from being a successful Journalist. She is from British. We have estimated Anne McElvoy’s net worth, money, salary, income, and assets.

She has been a regular presenter of the BBC Radio 3 late-night discussion programme since 2009, initially on Night Waves, and then its successor programme, Free Thinking. She has also appeared on BBC2’s Newsnight Review, and occasionally contributes to BBC Radio 4’s The Moral Maze.

In 1997 she became associate editor of The Independent. In 2002 she moved to the Evening Standard as executive editor remaining until 2009, though McElvoy still contributes a weekly political column. In 2009 she joined The Economist. She assisted Markus Wolf in the writing of Man Without A Face: The Autobiography Of Communism’s Greatest Spymaster and Memoirs Of A Spymaster: The Man Who Waged A Secret War Against The West, and The Saddled Cow: East Germany’s Life And Legacy.

In 1994, McElvoy married Martin Ivens, also a journalist, who is the editor of The Sunday Times. The couple have two sons and one daughter.

She joined The Times in 1988 as a graduate trainee,writing frequently about the dissolution of eastern Europe, and later reporting from Moscow. In 1995 she became deputy editor of The Spectator, as well as being a columnist on its sister publication, The Daily Telegraph.

Anne McElvoy (born 25 June 1965) is a British journalist, contributing to The Economist and the London Evening Standard, and the BBC. 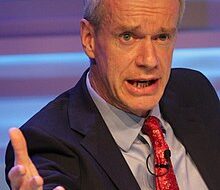