Don Tate was born on 21 December, 1963 in Des Moines, IA, is an Illustrator, Author. Discover Don Tate’s Biography, Age, Height, Physical Stats, Dating/Affairs, Family and career updates. Learn How rich is He in this year and how He spends money? Also learn how He earned most of networth at the age of 57 years old?

We recommend you to check the complete list of Famous People born on 21 December.
He is a member of famous Illustrator with the age 57 years old group.

He net worth has been growing significantly in 2018-19. So, how much is Don Tate worth at the age of 57 years old? Don Tate’s income source is mostly from being a successful Illustrator. He is from American. We have estimated Don Tate’s net worth, money, salary, income, and assets.

His first book as an author, It Jes’ Happened: When Bill Traylor Started to Draw, illustrated by R. Gregory Christie, was published by Lee & Low Books in 2012. It is a “captivating” biography of folk artist Bill Traylor, a former slave. The book received numerous awards such as a Lee & Low New Voices Honor Award and an Ezra Jack Keats New Writer Honor. It was selected as a Kirkus Best Children’s Books List Selection, a Booklist Editors’ Choice, 2012, and a New York Public Library Top 100 Titles for Reading and Sharing as well as one of Bank Street College of Education Best Children’s Books of the Year, 2012.

In addition to children’s books, Tate also licenses his art to product manufacturers. KIDZ is a line of juvenile bed and bathroom products including wallpaper, light switches, wall art and drawer knobs. He also has a line of children’s textile/fabric available at specialty fabric shops, which feature his designs. My Peepz, a group of African American characters, is marketed to tweeners and has been successful in the calendar market. Tate created the calendars due to a lack of African Americans on existing products.

Tate has been a featured illustrator/speaker/exhibitor at various literary festivals, including the Texas Book Festival, The Savannah Children’s Book Festival, The Dallas Children’s Book and Literary Festival, Bookamania (Chicago Public Library), and such conferences as: The International Reading Association; Texas Library Association Black Caucus Roundtable and The National Alliance of Black School Educators.

In his work, Tate often writes about historical figures who persisted during the period of American slavery. In the New York Times article “‘A Fine Dessert’: Judging a Book by the Smile of a Slave,” Tate was quoted on the topic, saying, “children’s books needed to show a range of experience, including suffering and enduring.” In 2016 television segment of Texas Country Reporter, Tate spoke about his work with stories of enslaved people and preserving these important narratives, stating the importance of telling children the truth and not sugar coating history.

Tate’s 2015 illustrated picture book Poet: The Remarkable Story of George Moses Horton tells the story of the 19th century slave in Chatham County, North Carolina who subsequently became the first African American in the Southern United States to write a book. Tate was inspired to write about Horton via a friend; he researched his life in the University of North Carolina archives. The Wilson Library at UNC hosted the national launch of the book on September 3, 2015. A review in the School Library Journal called the book “A lovely introduction to an inspirational American poet.” The Boston Globe called it “a moving biography of a slave who taught himself to read using a discarded spelling book”. In 2016, Tate won an Ezra Jack Keats Book Award, A Christopher, and a Texas Institute of Letters book prize.

Tate began his career as an illustrator with Say Hey: A Song of Willie Mays (Jump at the Sun/Hyperion, 2000), written by Peter Mandel.

Don Tate (born December 21, 1963) is an American author and illustrator of books for children. He is also an activist promoting racial and cultural inclusiveness in children’s literature. He notes that as a child he had to read the encyclopedia to discover a multicultural world; based on the children’s books of his day he “thought the world was white”. He co-founded the young African American blog The Brown Bookshelf and helps run the #WeNeedDiverseBooks campaign to improve diversity of material in children’s books. 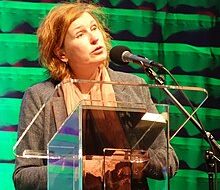