Quint Kessenich was born on 22 November, 1967 in Long Island, New York, United States. Discover Quint Kessenich’s Biography, Age, Height, Physical Stats, Dating/Affairs, Family and career updates. Learn How rich is He in this year and how He spends money? Also learn how He earned most of networth at the age of 53 years old?

On November 29, 2013, Kessenich made national headlines when he interviewed an indignant Bo Pelini at halftime of the Iowa-Nebraska football game telecast on ABC in which the Nebraska coach responded to the reporter’s inquiry on a pair of Cornhusker turnovers with “What do you think? What kind of question is that?” The incident came one week after Michigan State Spartans football coach Mark Dantonio snapped at Kessenich during the halftime interview.

Quint Elroy Kessenich (born November 22, 1967) is an American sportscaster for ABC and ESPN television covering lacrosse, basketball, football, hockey, wrestling and horse racing since 1993. He is a former All-American lacrosse goalkeeper. He attended the Johns Hopkins University from 1987 to 1990, where he was a two-time winner of the Ensign C. Markland Kelly Jr. Award as the nation’s best goalie. Kessenich played one year of professional lacrosse with the Baltimore Thunder in 1999, and played at the amateur level for the storied Mount Washington Lacrosse Club. He got his writing debut with a horse racing newspaper called The Saratoga Special, writing for brothers Joe and Sean Clancy in the famed horse racing town of Saratoga Springs. He is also a regular contributor to the lacrosse magazine, Inside Lacrosse. He is a color commentator with Joe Beninati or Scott Garceau for Chesapeake Bayhawks games on NBC Sports Washington and ESPN3. 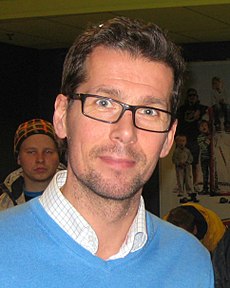