Rangi Kipa was born on 1966 in Christchurch, New Zealand. Discover Rangi Kipa’s Biography, Age, Height, Physical Stats, Dating/Affairs, Family and career updates. Learn How rich is He in this year and how He spends money? Also learn how He earned most of networth at the age of 54 years old?

He net worth has been growing significantly in 2018-19. So, how much is Rangi Kipa worth at the age of 54 years old? Rangi Kipa’s income source is mostly from being a successful . He is from New Zealand. We have estimated Rangi Kipa’s net worth, money, salary, income, and assets.

Kipa was originally trained in customary carving traditions. He credits his transition towards contemporary art practice to his Master’s study at the School of Māori Visual Arts, where he began carving Corian. He says “When I went to Massey I wanted to find a material I was totally unfamiliar with and in the second year I came across the manmade material Corian. It lit me up; before that I was using materials I had pretty much mastered and I was bored with them’’.

Kipa’s work is held in major collections in New Zealand including the Museum of New Zealand Te Papa Tongarewa, Puke Ariki and The Dowse Art Museum.

Early examples of Kipa’s Corian tiki were shown at Auckland Art Gallery in the exhibition Hei Tiki, which explored contemporary interpretations of the customary form. His contemporary hei tiki carving was featured on the New Zealand Post $1.50 stamp in the Matariki series in 2009.

In 2006 he received the Creative New Zealand Craft/Object Art Fellowship. He used the award to work in Thailand on a modern whare whakairo (carved meeting house) for inclusion in Star Power: Museum as Body Electric at the Museum of Contemporary Art Denver in 2007. Kipa was one of seven artists representing seven countries chosen for the museum’s opening exhibition.

In 2004 Kipa was a Te Waka Toi Inaugural Artist in Residence in the Jean-Marie Tjibaou Cultural Centre, Nouméa.

Kipa is a graduate of the Maraeroa Carving School in Porirua (1986), and completed a Bachelor of Social Sciences at Waikato University in 1994 and a Masters of Māori Visual Arts at Massey University in 2006. 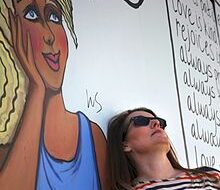