Ravindra Wijegunaratne was born on 22 February, 1962 in Sri, is a Sri Lankan admiral. Discover Ravindra Wijegunaratne’s Biography, Age, Height, Physical Stats, Dating/Affairs, Family and career updates. Learn How rich is He in this year and how He spends money? Also learn how He earned most of networth at the age of 58 years old?

We recommend you to check the complete list of Famous People born on 22 February.
He is a member of famous with the age 58 years old group.

He was awarded the Nishan-e-Imtiaz the highest of civil honor given by the Government of Pakistan in 2019.

On 18 August 2017, Wijegunaratne was promoted to the rank of Admiral and appointed Chief of Defense Staff in light of his upcoming retirement from active service. He assumed duties as CDS on 22 August 2017.

He was appointed the Chief of Staff of the Sri Lanka Navy on 7 July 2014, and promoted to Vice Admiral and appointed Commander of the Navy on 11 July 2015. On 22 February 2016, President Maithripala Sirisena granted him a six-month service extension as commander.

Promoted to the rank of Commodore, and then to Rear Admiral in 2009, Wijegunaratne has held several appointments and commands within the Sri Lanka Navy:

As Director Naval Operations in 2007, he oversaw the SLN’s efforts to halt Sea Tiger arms smuggling, leading to the destruction of what are thought to be the LTTE’s four final floating armouries.

Wijegunaratne has also held a diplomatic post as First Secretary and Defense Attaché at the Sri Lankan High Commission in New Delhi between 2001 and 2005. He has been a guest lecturer at the Center for Irregular Warfare and Armed Groups, US Naval War College and the Pakistan Navy War College.

Wijegunaratne is married to Yamuna De Saram and has one son, Satyajith. He has been a keen sportsman since his childhood, and is a qualified diver and parachutist; a parachuting accident in 2001 led to Wijegunaratne breaking both legs. In addition to playing hockey and basketball at school, he has represented the SLN in rugby, and rowing/sailing, both of which he has received Sri Lanka Navy Colours for. He is an expert marksman, and has held the Chair of the Sri Lanka Rifle Association and the Sri Lanka Navy Golf Club.

Starting out as a Sub-lieutenant, Wijegunaratne gained early exposure to the Sri Lankan Civil War fighting alongside India’s MARCOS in the Indian Peace Keeping Force’s 1987 Operation Pawan. Having been promoted to the rank of Lieutenant commander, he founded Sri Lanka’s elite Special Boat Squadron (SBS) in 1993, building on the work done by Lieutenant commander Shanthi Bahar. Wijegunaratne led the SBS during the Battle of Pooneryn and held its command twice through his career, once in 1993-1994 and again in 1999-2000. As a result of his specialization and work in the SBS, he is regarded as an expert in asymmetric naval warfare and small boat operations. Between June 2005 and March 2006, he served as Commanding Officer of the SLN’s flagship, SLNS Sayura He was also instrumental in forming the Sri Lanka Navy Marines.

Graduating in the same year, he enlisted in the Sri Lanka Navy on 1 November 1980 as an officer cadet as part of the 9th Intake at the Naval and Maritime Academy, Trincomalee. He completed officer training as a Midshipman at both Trincomalee and Dartmouth (where he was awarded ‘Best International Midshipman, 1982’) in 1982. He would go on to follow a Sub-lieutenant technical course and specialize in anti-submarine warfare in India, and followed a staff course at the Pakistan Navy War College. In 1996 he gained a BSc in War Studies from the University of Karachi, and later graduated from the National Defense University (NESA) and National Defence College, India (50th NDC Course – 2010). In 2010, he obtained an MPhil in Defence and Strategic Studies at the University of Madras. He is a Member of the Nautical Institute.

Born in 1962, Wijegunaratne was educated at the Royal College, Colombo from 1969. At Royal College, he was a President’s Scout, Lance sergeant of the Herman Loos Cadet Platoon and a School Prefect in addition to representing the school in both hockey and basketball, as well as being an All-Island Junior Athletics Champion. He was the fourth Royalist to be appointed Commander of the SLN. 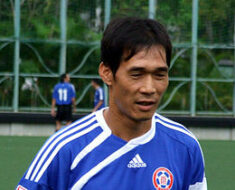