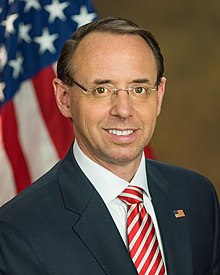 Rod Rosenstein (Rod Jay Rosenstein) was born on 13 January, 1965 in Philadelphia, PA, is an American lawyer. Discover Rod Rosenstein’s Biography, Age, Height, Physical Stats, Dating/Affairs, Family and career updates. Learn How rich is He in this year and how He spends money? Also learn how He earned most of networth at the age of 55 years old?

We recommend you to check the complete list of Famous People born on 13 January.
He is a member of famous Lawyer with the age 55 years old group.

Who Is Rod Rosenstein’s Wife?

His wife is Lisa Barsoomian

He net worth has been growing significantly in 2018-19. So, how much is Rod Rosenstein worth at the age of 55 years old? Rod Rosenstein’s income source is mostly from being a successful Lawyer. He is from PA. We have estimated Rod Rosenstein’s net worth, money, salary, income, and assets.

Rosenstein joined the law firm King & Spalding’s D.C. Office as a partner on the “Special Matters and Government Investigations” team in January 2020.

Rosenstein submitted his official resignation as Deputy Attorney General on April 29, 2019, which took effect on May 11, 2019.

Rosenstein served as the U.S. Attorney in Maryland at a time when murders in the state dropped by about a third, which was double the decline at the national level. Robberies and aggravated assaults also fell faster than the national average. According to Thiru Vignarajah, the former deputy attorney general of Maryland, “Collaboration between prosecutors, police, and the community combined with a dogged focus on violent repeat offenders was the anchor of Rosenstein’s approach.” Rosenstein regarded the heroin and opioid epidemic as a public health crisis, hired a re-entry specialist to help ex-offenders adjust to life outside of prison, and prosecuted several individual cases of corrupt police officers.

Former deputy FBI deputy director Andrew McCabe stated in a February 2019 60 Minutes interview that during the days after Comey was fired, “the highest levels of American law enforcement were trying to figure out what to do with the president,” including the possibility of invoking the 25th Amendment to have Trump removed from office. Rosenstein again denied such discussions occurred.

On March 22, 2019 Mueller released his report to Attorney General Barr. On March 24 Barr sent a four-page letter to Congressional leaders “summarizing” the Mueller report, although he later said he had not intended the letter as a summary. In it he said that Mueller had made no determination about whether Trump had committed obstruction of justice, and that Barr and Rosenstein had concluded that the evidence in the report was “not sufficient to establish that the President committed an obstruction-of-justice offense.”

Rosenstein was expected to step down from his position in mid-March. On February 19, 2019, President Trump announced his intention to nominate Jeffrey A. Rosen for the position of Deputy Attorney General. Rosenstein subsequently resigned from his position effective May 11, 2019.

Following the recusal of Attorney General Jeff Sessions and Comey’s dismissal, Rosenstein appointed Robert Mueller as special counsel to investigate alleged ties between the Trump campaign and Russia during the 2016 elections and related matters. Rosenstein previously assumed authority over the parallel FBI probe after the recusal of former attorney general Jeff Sessions over misleading remarks he made to the Senate Committee on the Judiciary during his confirmation process. On November 7, 2018, Trump transferred command of this oversight to acting US Attorney General Matthew Whitaker. It was reported in January 2019 that Rosenstein was expected to resign in the first half of the calendar year.

In an interview with the Associated Press, Rosenstein said he would recuse from supervision of Mueller, if he himself were to become a subject in the investigation due to his role in the dismissal of James Comey. Under that scenario, supervision would have fallen to DOJ’s third-ranking official, Associate Attorney General Rachel Brand. Rachel Brand resigned on February 20, 2018, leaving the responsibility to Jesse Panuccio.

In April 2018, Rosenstein reportedly personally approved the FBI raid on President Trump’s attorney, Michael Cohen, in which the FBI seized emails, tax documents and records, some of them related to Cohen’s payment to adult-film star Stormy Daniels. After ad interim U.S. Attorney Geoffrey Berman had recused himself, the search was executed by others in the office of the U.S. Attorney for the Southern District of New York and approved by a federal judge.

Eleven House GOP members filed articles of impeachment against Rosenstein on July 25, 2018, alleging he has stonewalled document requests from Congress and he mishandled the 2016 election investigation. Rosenstein has denied the allegations. No such impeachment was brought to the floor, with Ryan and Meadows backing down. Subsequently, it was revealed that Devin Nunes wanted to impeach Rosenstein, but was concerned that attempting to do so would delay the confirmation of Supreme Court nominee Brett Kavanaugh.

On September 21, 2018, The New York Times reported that Rosenstein suggested, in the spring of 2017 shortly after the dismissal of Comey, that he could secretly tape conversations between himself and Trump. He also allegedly suggested invoking the 25th amendment to attempt to remove Trump from office. Rosenstein strongly denied it, and other reporting suggested he had been sarcastic in his reference to taping Trump. The report gave rise to rumors that he would be fired.

President Donald Trump nominated Rosenstein to serve as Deputy Attorney General for the United States Department of Justice on February 1, 2017. Rosenstein was confirmed by the U.S. Senate on April 25, 2017. In May 2017, he authored a memo that President Trump cited as the basis for his decision to dismiss FBI Director James Comey.

On May 8, 2017, President Trump directed Sessions and Rosenstein to make a case against FBI Director James Comey in writing. The next day, Rosenstein handed a memo to Sessions providing the basis for Sessions’s recommendation to President Trump that Comey be dismissed. In his memo Rosenstein asserts that the FBI must have “a Director who understands the gravity of the mistakes and pledges never to repeat them”. He ends with an argument against keeping Comey as FBI director, on the grounds that he was given an opportunity to “admit his errors” but that there is no hope that he will “implement the necessary corrective actions.”

On May 17, 2017 Rosenstein appointed Robert Mueller as a special counsel to conduct the investigation into “any links and/or coordination between the Russian government and individuals associated with the campaign of President Donald Trump” as well as any matters arising directly from that investigation. Rosenstein’s order authorizes Mueller to bring criminal charges in the event that he discovers any federal crimes. Rosenstein said in a statement, “My decision is not a finding that crimes have been committed or that any prosecution is warranted. I have made no such determination. What I have determined is that based upon the unique circumstances the public interest requires me to place this investigation under the authority of a person who exercises a degree of independence from the normal chain of command.”

In an address at the Yale Club as he was preparing to leave the Justice Department following the release of the Mueller Report, Rosenstein criticized the Obama administration, the FBI, Congress, and the press for their conduct regarding Russian interference in the 2016 United States elections. Rosenstein asserted, “The previous administration chose not to publicize the full story about Russian computer hackers and social media trolls, and how they relate to a broader strategy to undermine America.” He asserted that former FBI director James Comey had stated that Trump pressured him to end the investigation into the matter. Rosenstein went on to say, “In politics — as in journalism — the rules of evidence do not apply.” He quoted President Trump advocating for the rule of law. He also criticized the FBI and Congress for leaks regarding the investigation.

As United States Attorney, he oversaw federal civil and criminal litigation, assisted with federal law enforcement strategies in Maryland, and presented cases in the U.S. District Court and in the U.S. Court of Appeals for the Fourth Circuit. In 2012, Attorney General Eric Holder directed Rosenstein to investigate leaks regarding the U.S.’s Stuxnet operation, which sabotaged Iran’s nuclear program; as a result of the investigation, former U.S. Marine Corps General James Cartwright pleaded guilty to making false statements to the FBI and acknowledged leaking information about the operation to New York Times journalist David E. Sanger. During his tenure as U.S. Attorney, Rosenstein successfully prosecuted leaks of classified information, corruption, murders and burglaries, and was “particularly effective taking on corruption within police departments.”

Rosenstein is married to Lisa Barsoomian, an Armenian American lawyer who worked for the National Institutes of Health until 2011. They have two daughters. As a government attorney, Barsoomian represented the United States in various matters, including Freedom of Information Act (FOIA) cases, and the FBI’s “Carnivore” surveillance system, which monitors and captures e-mail.

He was a member of Washington D.C.’s Temple Sinai, a Reform Jewish congregation, from 2008 to 2014. According to a questionnaire that Rosenstein completed ahead of a hearing with the Senate Judiciary Committee, he was a member of a Jewish Community Center’s sports league from 1993 to 2012. Rosenstein served on the board of directors of the United States Holocaust Memorial Museum from 2001 to 2011.

In 2007, President Bush nominated Rosenstein to a seat on the United States Court of Appeals for the Fourth Circuit. Rosenstein was a Maryland resident at the time. Maryland’s Democratic United States Senators, Barbara Mikulski and Ben Cardin, blocked Rosenstein’s nomination, claiming he did not have strong enough ties to Maryland.

President George W. Bush nominated Rosenstein to serve as the United States Attorney for the District of Maryland on May 23, 2005. He took office on July 12, 2005, after the U.S. Senate unanimously confirmed his nomination. He was the only U.S. Attorney retained by President Barack Obama.

From 2001 to 2005, Rosenstein served as Principal Deputy Assistant Attorney General for the Tax Division of the United States Department of Justice. He coordinated the tax enforcement activities of the Tax Division, the U.S. Attorneys’ Offices and the IRS, and he supervised 90 attorneys and 30 support employees. He oversaw civil litigation and served as the acting head of the Tax Division when Assistant Attorney General Eileen J. O’Connor was unavailable, and he personally briefed and argued civil appeals in several federal appellate courts.

United States Attorney Lynne A. Battaglia hired Rosenstein as an Assistant U.S. Attorney for the District of Maryland in 1997.

During the Clinton Administration, Rosenstein served as Counsel to Deputy Attorney General Philip B. Heymann (1993–1994) and Special Assistant to Criminal Division Assistant Attorney General Jo Ann Harris (1994–1995). Rosenstein then worked in the United States Office of the Independent Counsel under Ken Starr on the Whitewater investigation into President Bill Clinton. As an Associate Independent Counsel from 1995 to 1997, he was co-counsel in the trial of three defendants who were convicted of fraud, and he supervised the investigation that found no basis for criminal prosecution of White House officials who had obtained FBI background reports.

After his clerkship, Rosenstein joined the United States Department of Justice through the Attorney General’s Honors Program. From 1990 to 1993, he prosecuted public corruption cases as a trial attorney with the Public Integrity Section of the Criminal Division, the latter of which was led by then Assistant Attorney General Robert Mueller.

Rod Jay Rosenstein (/ˈ r oʊ z ən ˌ s t aɪ n / ; born January 13, 1965) is an American attorney who served as the 37th United States Deputy Attorney General from April 2017 until May 2019. Prior to his appointment, he served as a United States Attorney for the District of Maryland. At the time of his confirmation as Deputy Attorney General in April 2017, he was the nation’s longest-serving U.S. Attorney. Rosenstein had also been nominated to the United States Court of Appeals for the Fourth Circuit in 2007, but his nomination was never considered by the U.S. Senate. 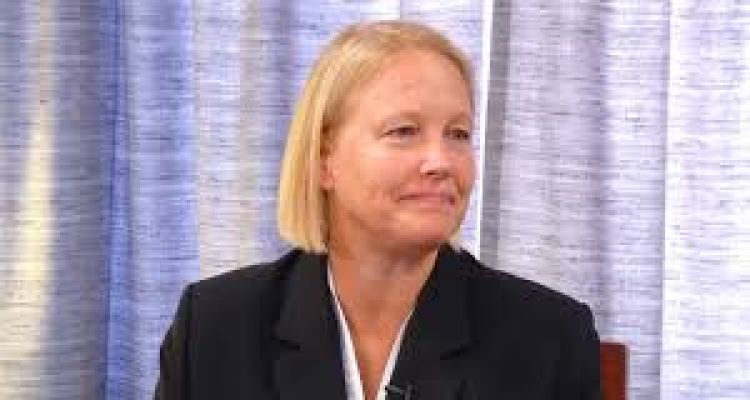